Last weekend the John Holtger Racing Team traveled to Chandler, AZ for round 1 & 2 of the Arizona Regional Lucas Oil Off Road Racing Series. This was the first race of the season in Arizona, and was a double header with races on Saturday and Sunday. 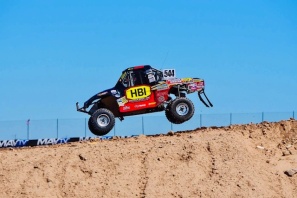 The weekend started on Friday with open practice. It’s been nearly 5 months since John was last on this track, so it was well appreciated time!

16 drivers participated in the Mod Kart class on Saturday. John was able to qualify 4th. The race was quite a battle! The top five drivers went back and forth for most of the race! On the final lap the 2 cars in front of John got tangled up with Chiaramonte rolling over a couple of times. This allowed John an open door to pull into 2nd place. John had to drag race Prater to the finish line, which resulted in a 2nd place podium finish!

16 drivers participated in the Mod Kart class on Sunday as well. John started the day in a  good spot and did everything asked of him. He qualified 3rd and made the 4 car invert that put him on the outside of the front row to start the race. Unfortunately, we as a team could not overcome a mechanical glitch that kept the truck from starting for the final race of the weekend.

It was a tough end to the weekend, but the team kept a positive attitude and turned our focus to making some improvements for the next race!

On April 13th & 14th John and team head back to Chandler, AZ  for the LOORRS joint National & Regional race at Wild Horse Pass! Stay tuned for updates as John takes on the strong competition in the Mod Kart division both Saturday and Sunday!