In early October the John Holtger Racing Team traveled to Texas for the final round of SXS Sports, LLC 2019 Chasing the Triple Race Series!

The course at TexPlex Park was unlike the normal off-road course! It was a 10 mile track that was a short course/cross-country combo! The race itself was 6 laps, timing out at about 1 hour total per race! 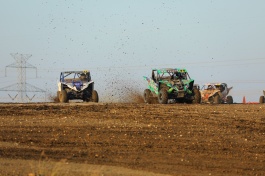 Practice went well on Friday, and John came in with the fastest time! In the race on Saturday, John’s Maxxis Big Horn Tires really hooked up and pulled him out front at the start! He maintained the lead spot through 5.5 laps (just over an hour) until he hit a rut just a little off, and it threw him up on the side bank. He then rolled down the bank, and landed on the track on his side.

With only one lane through this tight section the next (2) UTV’s hit him as they climbed the bank trying to get around him. It wasn’t until a fellow MW racer got to him and actually made a couple of planned hits to the #44 that got John flipped back on his wheels; allowing him to continue, and cross the finish line 4th!

Overall, it was a fantastic weekend for the team! This wrapped up the SXS Sports, LLC 2019 Chasing the Triple Race Series Season! After battling hard against the seasoned drivers in this class all year through the ice, snow, rain, mud, and enduring a cross-country course, John ended up 2nd place in series points for the year, and also ended up with the Maxxis Tires Fastest Lap Award! Big “thank you” to Johnny and Kathy Greaves for organizing such a great series, and putting on an outstanding awards banquet!